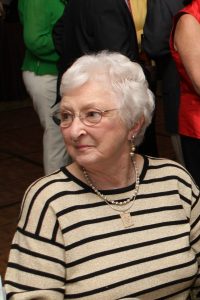 Born in Providence, R.I., she was a daughter of the late Harold Redwood and Ona Hansen Curtis. A graduate of Edgewood Junior College in Providence, R.I., Mrs. Babb worked for Quonset Point Naval Air Station in Cranston, R.I., during World War II. She later worked for Dupont in Camden, S.C., where she was also a member of Grace Episcopal Church. In 1964, she married Buck and moved to Laurens, S.C. Mrs. Babb joined First United Methodist Church where she served faithfully for many years and was also member and past president of the Azalea Garden Club. She spent a lot her time volunteering with the American Cancer Society and the Laurens County Hospital Auxiliary. Nancy enjoyed playing bridge, square dancing, and traveling.

Memorial services will be held at 1:30 p.m. Thursday, March 8, 2018 in Martha Franks Rasor Chapel. A private committal ceremony will be held in Laurens City Cemetery.

The family will be at their respective homes and will receive friends at the Martha Franks Rasor Chapel immediately following the memorial service.