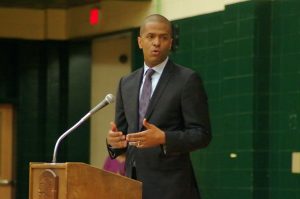 Sellers, a former member of the S.C. House of Representatives representing the 90th District, lawyer and political pundit on CNN, challenged LDHS students to start “dreaming with your eyes open.”

Sellers recalled his own foray into state politics when he became the youngest state legislator in the country in 2006 while still attending the University of South Carolina School of Law. He served in the House until 2014 when he gave up his seat to run for Lt. Governor, an election he lost.

“I was the only guy there still wearing a backpack,” recalled Sellers.

Sellers also shared the stories of South Carolina Civil Rights leaders, including those of George Elmore, who challenged voting laws in 1946, as well as Sellers’ father, Cleveland Sellers, a professor and noted Civil Rights organizer in the 1950s and 1960s who was shot and wounded during the Orangeburg Massacre in February of 1968.

Any progress in race relations has been built on the shoulders of the Civil Rights leaders of the 1960s, often the ones not as famous as King and Rosa Parks, Sellers said.

“In this great country we live in, we have made great progress, but we still have a ways to go,” he said, making note of Dr. Martin Luther King, Jr., who wrote a book entitled, “Where do we go from here? We Can Either Have Chaos or Community,” which was a plea to end poverty and inequality.

“I can’t help but believe that we’re on the brink of chaos,” said Sellers, referring to his work as a political commentator or CNN. “For me, it’s like drinking water from a fire hose – that’s how the news comes so rapidly and is so consuming. . . . But the challenge for all of us in this room is to build community.”