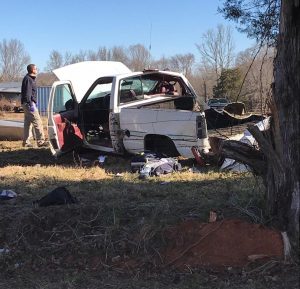 The man suspected of stealing a Laurens CPW pickup crashed into a field on Ora Road after running over stop sticks placed by the LCSO.

According to Laurens Police Assistant Chief Chrissie Cofield, the chase ended after the suspect ran over stop sticks placed on Ora Road by deputies from the Laurens County Sheriff’s Office.

The suspect, Ricky Dale Summerall, Jr., of Laurens, ran over the stop sticks, lost control of the vehicle and crashed into a pasture. He was arrested and flown by helicopter to Greenville Memorial Hospital for further examination as “a precautionary measure.”

The crash is being investigated by the S.C. Highway Patrol.