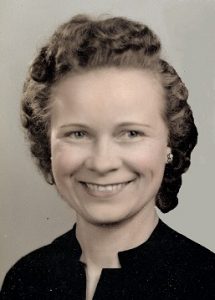 Adele Pihlak Strickland passed from this life on Tuesday, February 7, 2018. She was born in Gillette, Wyo.., on May 31, 1919, to John M. Pihlak and Elena Weikmann Pihlak. She was preceded in death by her husband, Marshall C. Strickland on May 10, 1999, and is survived by nieces Judy S. Humphries of Laurens, S.C., and Rosemary P. Marti of Arvado, Colo., a nephew Timothy C. Strickland of Laurens, SC., special friend Janett T. Simmons and other relatives in the USA and Estonia.

Adele met and married Marshall C. Strickland in Fort Warren, Wyo., in January, 1943, while employed by IRS in Cheyenne, Wyo. She had a long and interesting secretarial career, including Secretary to Adj. General Hq. 19th Bomb Wing, Anderson Air Base, Guam. Her husband’s unit was first to make a bomb run on North Korea in 1950. In former years Adele was a member of the Business and Professional Women’s Club and the Order of the Eastern Star.

A Graveside Service will be held on Wednesday, February 28, 2018 at 10:00 a..m at Fort Sam Houston National Cemetery in San Antonio, Texas.