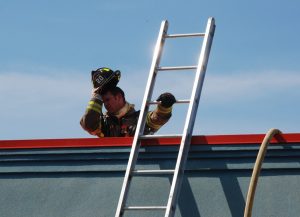 A Laurens firefighter removes his helmet while working a fire that broke out Tuesday in the kitchen at Burger King on Highway 76 in Laurens. (Photo by John Clayton)

Firefighters from the Laurens Fire Department responded early Tuesday afternoon to a fire at the Burger King restaurant on Highway 76 in Laurens.

According to Burger King employees, the restaurant’s broiler caught fire and flames reached into the hood and burned the ceiling. The fire broke out during lunch hours Tuesday.

No injuries were reported. Firefighters from the LFD were able to extinguish the blaze.