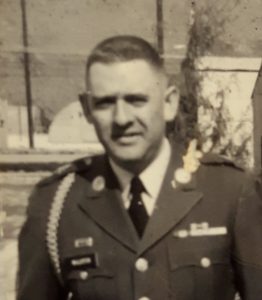 Born in Bermuda, Ala., he was a son of the late John and Mattie Belle Ryland Walston.  Roger joined the US Army in 1951, and served with the 24th Infantry Division in Japan and Korea from 1952-1954. He has also seen active duty with the 7th Infantry Division in Europe and with VII Corps Headquarters.  He is a graduate of the 7th Infantry Division’s NCO Academy.  He also served as supply sergeant at Jacksonville State College for the ROTC.  After Jacksonville, he served in Germany, Vietnam, Fort Jackson, SC, and retired as SFC at Fort McClellan, AL in 1971. Roger was also a member of Bethel Baptist Church where he formerly served as deacon and Sunday school teacher.

Funeral services will be held at 3:00 p.m. on Saturday, February 3, 2017, at The Kennedy Mortuary Chapel with burial following in Forest Lawn Cemetery with Full Military Honors.

The family will be at the residence and will receive friends at The Kennedy Mortuary from 2:00-3:00 p.m. on Saturday.