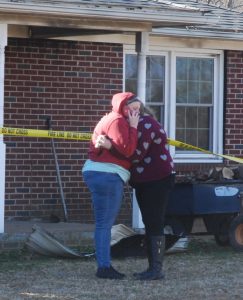 Leslie Eubanks awoke Tuesday morning to find her car battery dead, but the worst was yet to come.

An early morning fire severely damaged the interior of her residence on Little Acres Road in Clinton, but Eubanks said she walked outside about 7:30 a.m. to discover the dead battery in her vehicle. A few minutes later, the fire was discovered. The fire gutted the interior of the single-level ranch-style brick home.

“That dead battery may have saved my children’s lives, and I thank God for that,” she said. “I’m praising God in the midst of the storm.”

Eubanks said that she called her son for a jump after discovering her dead car battery. When he went back into the house, he discovered the fire, and the house quickly filled with black smoke.

Shiflet said no one was injured in the fire.

“The smoke detectors were working; we could hear them when we got here, so that was good,” he said. “It’s bad, though, at this time of year.”

Tuesday’s fire was among several house fires in Laurens County to occur since Christmas Day.