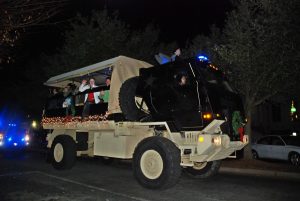 The Laurens County Sheriff’s Office acquired a LMTV through a military-surplus program.

Some Laurens County residents got their first look at one of the latest additions to the Lauren County Sheriff’s Office Saturday during the Laurens Christmas Parade.

The LCSO’s new LMTV (Light Medium Tactical Vehicle), a military-surplus armored truck, was outfitted with Christmas lights and chugged through the parade, but is expected to do more serious work in the county.

The vehicle was obtained through a military-surplus program at no cost to the LCSO and had fewer than 300 miles on it when picked up from Charleston. It has an armored designation because it was originally bound for the Middle East.

Because it is an armored vehicle, the LMTV can be used in SWAT team operations if needed, but has also been put to work on a more regular basis as a blue-collar work truck, Evans said.

“It’s basically a deuce-and-half; it’s just got a different front end on it,” he said. “If we had another snow-and-ice storm like we did a few years ago, it’d have little problems rolling in that.”

The LCSO has already used the vehicle to retrieve stolen goods and transport them back to the department, and Evans said it has a broad range of uses, looking back back to the LCSO’s search for a missing child in the county earlier this year.

“We could put teams in the back of the vehicle and drop them off just like the military does,” he said. “Then, we could take it off road if we needed to. There are a lot of options.”

According to Evans, the LMTV can hold 18-20 people in the back as well as a crew of three in the cab.

“The great thing about this is if the vehicle ever gets to the point where it’s costing us money and the Sheriff says it has to go, all I have to do is make a call and turn it in,” said Evans, noting that the same Federal program that offers the vehicles will also supply parts when needed.