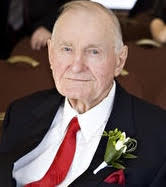 After graduating ROTC from Clemson University in 1941, he served his country as a U.S. Army officer from 1941-1946 during WWII and attained the rank of Major. As “C” Company Commander, 28th Infantry Regiment, 8th Infantry Division, he was shot in the neck on 8 July 1944 during the early stage of the successful Allied/US Army breakout near La Hayed du Puits, Normandy, France. He was awarded the Silver Star for gallantry in action “while leading his company’s attack in the face of intense enemy artillery and machine gun fire”. The accompanying Citation continues … “Disdaining medical attention, Captain Wham remained with his men and continued to lead the attack”.

He was wounded again on 7 December 1944 in the Battle of the Hurtgen Forest near Kommerscheidt, Germany. This was an area the Germans were probing just prior to their attack to commence the Battle of the Bulge. He was subsequently awarded the Bronze Star.

For his combat injuries, he received the Purple Heart with bronze oak leaf cluster. Additional service medals included the American Defense Service Medal, American Campaign Medal, European-African-Middle Eastern Campaign Medal with 3 bronze service stars, World War II Victory Medal, Army of Occupation Medal with Germany clasp, Combat Infantryman Badge 1st Award and Honorable Service Lapel Button WWII. Notably, he was present and participated in the discovery and liberation of the Nazi concentration camp near Wobbelin. After receiving the surrender of major German forces at Schwerin in early May 1945, he served as Economics Officer in the US Sector Military Occupation and Government at Karlsruhe into the Fall of 1945. He was honorably discharged from the U.S. Army reserves in February 1953.

Dr. Wham worked for the Hearst Corporation in New York City, Manhattan for 40 years where he was Vice President and Technical Director of the Good Housekeeping Magazine Institute. Dr. Wham and his co-workers were responsible for the technical evaluation and testing processes by which client companies earned the Good Housekeeping Seal of Approval for their consumer products. Dr. Wham was recognized as an international expert in consumer product performance, testing and safety standards.

Interment will take place privately at Cedar Hill Cemetery in Hightstown. A public Memorial Service will be held on Dec. 7, 2017 at 3:30 p.m. at 300 Etra Road, Hightstown, NJ 08520 (in the Meadow Lakes Community).