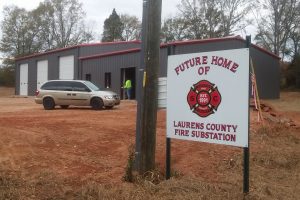 The Laurens County Fire Department’s Thompson Road Substation is taking shape and is to open in the summer of 2018.

Laurens County Fire Services Director Greg Lindley presented a plan to the Laurens County Council this past week for the Thompson Road Fire Station in the Fountain Inn that will call for six full-time firefighters who are also certified emergency medical-technicians (EMTs).

“We’re going to use Thompson Road as a pilot and see how this goes,” Lindley said. “Depending on how it goes, we want to look into it for the rest of the county.”

Lindley said having trained EMTs as firefighters is nothing new for his departments, but this is the first time those with both certifications will be hired exclusively to staff a fire station.

“This is nothing new for us, we’re just stepping up what we’re already doing for the people of Laurens County,” he said.

According to Lindley, 60 percent of the calls received by county fire stations in Laurens County are medically related and firefighters are often first on the scenes of emergencies. Trained EMTs can administer some drugs (insulin, for example during diabetic emergencies) and clear blocked airways.

“If someone is in cardiac arrest, statistics say that first responders arriving within nine minutes give the victim a 1-in-15 chance of survival. If we arrive in four minutes, it goes to a 1-in-3 chance with capable medical care.”

Laurens County Administrator Jon Caime said Lindley is taking a model for crossover emergency personnel that originated in more urban areas, but one that can work for the county.

“We can respond with a fire truck and be able to provide basic life-support services, and that will help save lives,” he said.

Lindley said he does not anticipate hiring six full-time firefighters with EMT certification to be difficult.