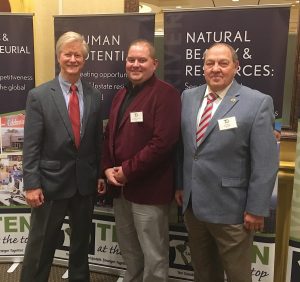 Laurens, SC – For the second time in just two years, Main Street Laurens has been selected for a $5,000 Hughes Investments Elevate Upstate Grants, community vibrancy grant funds which will go toward the city’s brand new Food Truck Plaza, behind Verdin’s Too at the corner of N. Harper and Laurens Streets in hopes that it will become a destination for Laurens residents.

In 2015, Main Street Laurens won the same grant funds for its launch of the Finally Friday! summer concert series, which has helped bring people into the Historic Downtown these last two summers.

“With a community vibrancy program the plans have to be for something brand new and yet something that we can maintain,” Irick said. “We applied for the food truck plaza area, and now the funds will go toward putting in some shade sails, adding brick pavers and picnic tables.”

Irick said two grants were awarded – one to Main Street Laurens and also one was awarded to Greenwood Art Center’s Bee smART, an interactive art program.

“We got a check for $2,500 today and we will get the other $2,500 mid-year,” Irick said.”The next steps will be to work with the City of Laurens to determine if there is any grading that will be needed. Then the grant funds will be used to purchase shade sails, picnic tables and brick pavers for the area.”

Irick said Main Street, its volunteers and the city can then work to promote the Food Truck Plaza, he said and hopefully have a grand opening in the spring.

Look for more on the award in the Wednesday, Nov.22 issue of The Laurens County Advertiser.