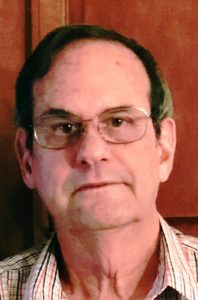 James Thomas (Tom) Parris, 69, of Greenville, S.C., died peacefully at his home and went to meet his Lord and Master on November 16, 2017, after several months of declining health.

Born on April 3, 1948, he was the son of the late James Robert (Bob) and Virginia Nelson Parris of Enoree, S.C. He attended, whenever possible, the Ora Associate Reformed Presbyterian Church in Ora, S.C.

After graduation from Woodruff High School in 1966, Tom served 4 years in the U.S Air Force. Upon his completion of military duty, he earned an Associate Degree in Horticulture from Spartanburg Technical College and planted & managed apple orchards in Salem, S.C., for several years. From apples, he accompanied his wife, Marilyn, to Charleston, S.C., and was the Grounds Manager for the Medical University of S.C. for 2 years while she attended the University. While living in Swainsboro, Ga., he earned a BS Degree in Business Administration from Georgia Southern University. He worked in the Insurance Business for a number of years both in Georgia and Greenville, S.C. He achieved the LUTCF, CLU and CFP.  His final stint in the work field was with the State of SC in Social Services from which he retired after 14 years of service.

Tom enjoyed playing tennis for many years while living in Swainsboro, Ga., and along with his wife, Marilyn, enjoyed maintaining a year-round beautifully landscaped yard full of beautiful flowers, roses, etc. in Greenville, S.C.  He had been an active member in the Greater Greenville Rose Society and assisted in putting on Rose Shows in the Carolina District. He also helped maintain the Shaw Rose Garden in Greenville, S.C.  He enjoyed cooking, grilling and looking forward to sharing his “concoctions” with family and friends and watching their reactions and hearing their comments about his latest recipe. He was an avid and loyal Georgia Bulldogs and Atlanta Falcons Fan.

In October 2015, Tom became involved with the Honor Flight Veteran Program. He went on the Military Honor flight to Washington, D.C., and was responsible for two WWII Veterans from his neighborhood. In October 2016, he went again with another WWII Veteran.  These trips meant the world to those Veterans and their families and to Tom knowing how much the Veterans and their families appreciated and trusted him to take care of their loved one while on these trips, which may have been a once in a lifetime trip for most of these Veterans.

A celebration of Tom’s life will be held on Tuesday, November 28, 2017, at 4:00 p.m. at the Ora Associate Presbyterian Church, 23420 Hwy 221. Visitation and refreshments will be held in the church’s social hall after the brief graveside service which will follow the service in the sanctuary.

On-line condolences may be sent to the family via www.cremation-sc.com (OR to individual family members if you have their “technical communication” information).