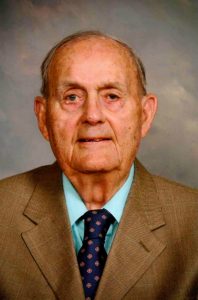 Mr. Larry Bates Holland of Laurens, S.C., died on Saturday, October 28, 2017 at Laurens Memorial Hospital, after a brief illness.  Mr. Holland was born in Honea Path, S.C., on August 14, 1921, the son of Arthur Brown Holland, Sr. and Janie Ashley Holland.  Mr. Holland was a member of the First Presbyterian Church in Laurens for over 60 years.

Mr. Holland served in World War II as a member of the Army, Headquarters Company, Second Battalion, 311th Infantry.  Along with his fellow solders he served in combat missions in France and Germany from November 17, 1944 until his unit’s departure for the United States on January 8, 1946.  His unit participated in the battles and campaigns of the Ardennes, Rhineland and Central Europe. He received the American Theater Service Medal, Europe-American Theater Service Medal with three Bronze Stars, Good Conduct Medal, Word War II Victory Medal and Distinguished Unit Badge.

Mr. Holland, affectionately known as Jabby, was a loving husband, father, grandfather and great grandfather.  His greatest pleasures were spending time with all his family and especially in his later years, with his grandchildren and great grandchildren. Throughout his life he loved outdoor activities with family, including camping, fishing, boating, trips to the beach, football games in general and Gamecock games in particular and of course his TV programs, Andy Griffith and Gunsmoke. He will long hold a special place in the hearts of all who knew and loved him.

The family will be at their respective homes.  Condolences may be made to the family at www.thekennedymortuary.com.