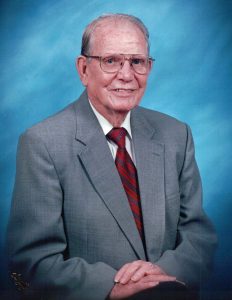 Mr. Bigham served in World War Two as a member of the United States Army earning a Purple Heart. Mr. Bigham was a long time resident of Clinton, S.C.  He worked and retired from Clinton’s US Post Office. As a Postman, he knew virtually every street in Clinton and a great many of the town’s residents.  As lifelong member of the Davidson Street Baptist Church, he served in many positions including Deacon, various committee memberships and Sunday School Teacher.  He made an impact on countless elementary/middle school children who were in his Bible Learners Class by buying them leather bound Bibles with their name embossed on the cover if they could memorize the requisite number of Bible verses. He loved his family, and he will be greatly missed by all of them.

Funeral Services will be held at 4:00 p.m. on Tuesday, October 31, at Davidson Street Baptist Church (Clinton, S.C.). A visitation will be held two hours prior to the service (2-4 p.m.). Interment will follow at Rosemont Cemetery.