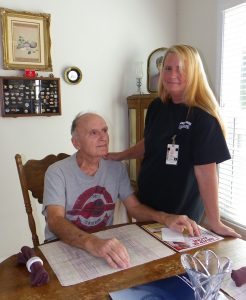 Gray Court mail carrier Renea Chappelear says the people on her route are more than numbers on a mailbox; they’re her friends.

To Ed Andrews, Chappelear is more than a friend; she’s his hero.

“There’s my lifesaver,” Andrews said as Chappelear approached him from his driveway Tuesday afternoon. “I just got thank God for her.”

Andrews, 80, fell in his bedroom during the early morning hours of Sunday, Aug. 27, fracturing his hip. He was unable to get to his feet or even to a telephone to call for help. He laid there for more than three days without food or water.

Chappelear, who has been with the U.S. Post Office in Gray Court for 25 years, had just returned from vacation when she noticed Andrews’ mail piling up in the box. She said that he always put a hold order on his mail if he was leaving town, and she usually saw him out walking.

“He always places a hold order, and he always gets his mail out of his box,” she said.

She placed a call to nearby neighbor and Hickory Tavern Volunteer Firefighter Barry Linder, who responded. He entered the house, which is about a mile away from the Hickory Tavern Fire Department, through a rear window a few minutes later and found Andrews lying in the floor, dehydrated and delirious.

“If she hadn’t acted, he might not be with us today,” said Ned Andrews of his father.

There is little doubt in Ed Andrews’ mind that he would have died on that floor had Chappelear not called for help.

Still, Chappelear was uneasy about what Linder might find.

“I was a little nervous until Barry called me back and told me that he had (Andrews),” Chappelear said. “When (Linder) got here, he said (Ed’s) car was in the garage, and I knew then that he was here somewhere.”

Andrews underwent surgery to repair the fractured hip on Aug. 31 and underwent nearly six weeks of physical therapy in Greenville before returning home on Oct. 11.

Since returning home, he said he has taken measures to prevent another dire situation such as the one he found himself in before.

“I’ve gotten the phone down at a lower level, and I’ve got one of those (emergency call) buttons coming,” said Andrews, who is expected to make a full recovery and get back to the golf course.

Chappelear shrugged off being called a hero, despite the assertions of Andrews and his family.

“But the thing is, you did it,” Andrews added. “A mail carrier or anybody else – sometimes people just don’t think like that.”