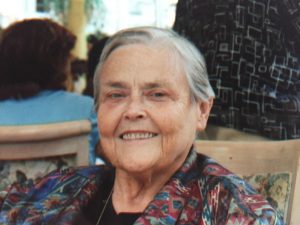 Anne Thomson Sheppard, age 85, died on October 22, 2017, after years of declining health. Predeceased in 1996 by her husband George (Gerry), she is survived by her four children (Frank, Tom, Martha and Margaret), their spouses, eight grandchildren, five great-grandchildren and one great-great-grandchild.

Born on February 23, 1932, in Charlotte, N.C., Anne was the only child of William Francis (Frank) and Nina Hunter Thomson. Her father’s job required the family to move almost yearly when Anne was young, but by the time she was nine, they had settled in Temple Terrace, Fla. Anne graduated from Hillsborough High School in 1949 and Agnes Scott College in 1953, where she received a B.A. in English. It was through her roommate, Priscilla Sheppard, that she met the love of her life, Gerry Sheppard, a graduate of Princeton University and a chemical engineer by profession.

Upon graduation from college Anne spent a year in Washington, D.C., working for the National Security Administration. During that year Anne and Gerry courted long distance, and on September 11, 1954, they were married in Tampa, Fla. They settled in Laurens and in 1955 built their family home on the corner of Longview Drive and Old Stagecoach Road. In 1996, they moved to Martha Franks Retirement Community where Anne remained for the rest of her life.

In 1963, Anne took a long-term substitute teacher position at Laurens High School, filling in for an English teacher on maternity leave. She was hired for a full-time position at the end of that year. She earned her MAT in 1965 from Converse College and taught English until 1988, having shared her enthusiasm for reading and American literature with numerous 9th- and 11th-graders. During her teaching tenure, she directed the junior play, managed the concession stand for the school band, mentored the National Honor Society and co-led several groups of students on trips to England and France. While teaching full-time and raising her family, she also volunteered with the Laurens Hospital Auxiliary, at Wayside Presbyterian Church and at First Presbyterian Church (Laurens) as an elder and Sunday school teacher.

Upon retirement, Anne continued to be publicly engaged. She was appointed to both the South Carolina State Board of Education and the Board of Trustees of the College of Charleston. She also devoted many hours of service with Laurens County First Steps, Laurens County Community Concert Association and as a Laurens County Guardian ad Litem. While pursuing her many volunteer activities, Anne always found time to travel. She visited all 50 states and many European countries, the history and culture of which she greatly enjoyed sharing with her family on several extensive trips.

A memorial service will be held on Friday, Oct. 27 at 2 p.m. at the First Presbyterian Church, 400 Main St., Laurens.