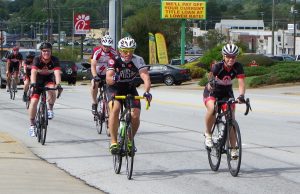 Cyclists participating in the S.C. Law Enforcement Torch Run rolled through Laurens County on their way to Charleston Monday. The three-day ride is part of a series of law-enforcement-backed fundraisers for Special Olympics.

Will Richter, a deputy with the Sheriff’s Office of Greenville County, said the ride, which includes stops in Newberry and Orangeburg before concluding in Mount Pleasant, has raised more than $5,500 this year. Statewide, events related to the Torch Run are expected to raise more than $1 million for Special Olympics.

“It makes a tangible difference,” Richter said. “I feel like we get more out of it than the athletes do.”

More than a dozen cyclists were making the trip. Most of them were associated with law enforcement, including two husband-and-wife teams from the S.C. Highway Patrol.