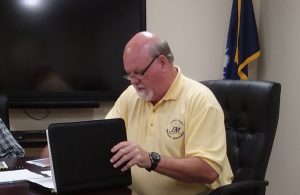 The first confirmed case of the West Nile Virus in Laurens County has been reported, county officials said Friday afternoon.

The S.C. Department of Health and Environmental Control has identified locations in Laurens and neighboring Greenwood counties where spraying for mosquitos will begin Saturday night, barring rainfall in the area.

“We’re trying to be proactive and protect the public as best we can,” said Laurens County Emergency Services Director Joey Avery.

West Nile Virus is transmitted almost exclusively by mosquitoes and is not contagious.

What to know about mosquitoes

Laurens County officials have contracted with Gregory Pest Control to spray in targeted areas in the southwest quadrant of the county, which includes the Waterloo and Ware Shoals areas. The county could spray for mosquitoes as many as three times in the coming weeks if necessary.

Rob Russian, Laurens County director of public works, said the spray, which will be performed from a pickup truck with an aerial sprayer attached, is not unlike the work done by municipalities throughout the Upstate, including Clinton.

“What we’re doing is very similar to what Clinton and other municipalities have done in the past,” Russian said.

Employees from Gregory Pest Control will also be going from door-to-door in targeted areas in search of potential mosquito breeding grounds.

Neither the identity of the person who has contracted the virus nor the exact location of the victim could be released due to privacy laws.

Avery also said local citizens can be on the lookout for potential mosquito breeding grounds, including stagnate water that could be sitting in puddles, plants or trash – practically anywhere water can stand. Residents are encouraged to “mosquito-proof” their homes as much as possible by ridding properties of standing water.

Those with breathing issues in the targeted areas are also asked to stay indoors if spraying is occurring in your area, Avery said.

Here are other tips provided by DHEC and the Center for Disease Control on misquitoes:

According to the CDC, 70-80 percent of people who become infected with West Nile do not develop any symptoms at all.

Symptoms take 2-14 days to present themselves. Those symptoms often include headache, body aches, joint pains, vomiting, diarrhea or rash. In most cases, recovery takes a few days, but fatigue and weakness can last for weeks or months. Less than 1 percent of people infected develop serious neurological illness such as encephalitis or meningitis.

Avery said his agency has been working with DHEC for more than a year in preparation of an instance such as the one reported, and the county is following DHEC protocols. Anyone with questions or concerns may contact county emergency services at 864-984-4731.

“We’re not over-reacting to this event here, but we’re trying to be active enough to keep people safe,” he said.