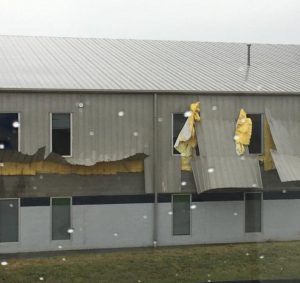 Laurens Academy was damaged by Sunday afternoon’s storm, and school officials have cancelled classes on Monday as they further assess the extent of the damage to the school.

Several families had already expressed a willingness to volunteer in cleaning up  downed trees and other needed work, but headmaster Todd Kirk explained it was still too soon to develop a plan.
“We are dealing with a number of issues from the storm,” Kirk said. “Tomorrow morning we will be speaking with our insurance company and will have a better idea of our needs.”
The lower building which contains the gymnasium and classrooms was damaged, as well as the younger children’s playground and other areas of the main campus. Also sustaining damage from the high winds were the nearby football field’s press box, light poles and bleachers. Several trees were also blown over.
Laurens Academy is located on Highway 49 about 5.5 miles northeast of Laurens.
The county remained under a tornado warning for some time Sunday afternoon and damage was also reported on Old Airport Road, a house trailer was destroyed on Curry Road and downed trees and power outages were also reported on the east side of the City of Laurens at Eastglen Farms.
Laurens Commission of Public Works general manager John Young said due to the extent of the damage CPW needed to close down gas lines leading out to highway 49 .
See more on the storm  in the Wednesday, Oct. 11, issue of The Laurens County Advertiser.
Posted in News and tagged Laurens SC, storm, Sunday storms, Tornado, weather