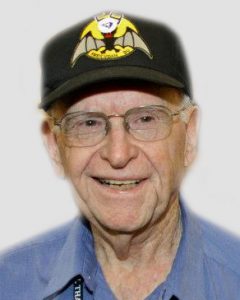 Whiteford’s lost one of its most well-known and beloved customers on Wednesday, October 4, when William Francis “Bill” Thomas passed away, at age 87, at Hospice of Laurens County in Clinton, S.C.

Mr. Thomas enjoyed an almost 30-year career as an engineer, plant manager, and administrator in Oak Ridge, TN, Kokomo, IN, Florence, SC, Paducah, KY – and then back to Oak Ridge. He also served as a navigator in the Air Force and was stationed in Thule, Greenland during the Korean War.

He lived in Clinton for more than 25 years and was an active member of the community. You may have encountered him at his son’s optometry office where he worked making glasses, at the Y where he exercised well into his later years, at First Presbyterian Church, at a Pep Club event, or – most likely – at Whiteford’s, where he organized a coffee group that met every week for more than 20 years, bringing light and life both to its members and to the people they regularly charmed.

He was awarded the Order of the Palmetto by the state of South Carolina.

Funeral services will be conducted at First Presbyterian Church in Clinton at 11 a.m. on Friday, October 6.