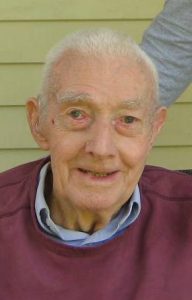 Karl was born on March 12, 1920 to the late Elisabeth Ostermann Niebacker and Karl Niebacker in Braunschweig, Germany.  He was their only child and proudly immigrated to the United States on March 18, 1926.

Karl lived in Hamden, Conn., with his parents until his departure into the Army for World War II on May 27, 1943. He continued to remain in constant contact with his sweetheart Grace Lucille Frischkorn. He proudly served in the Hawaiin Islands and Tiniaan until his Honarable Discharge from the service on February 4, 1946.  On March 16, 1946 Karl married Grace Frischkorn. They were together for over 57 years at the time that Grace passed away in 2003.

After graduating from Boardman Trade School in New Haven, CT Karl held many different jobs over the years.  He was a machinist, a research metallurgist at Olin-Winchester, a painter and a custodian for Blue Cross-Blue Shield of CT to name a few jobs that he held.

Among Karl’s greatest accomplishments was the building of the retirement home for he and Grace in Gray Court, S.C., at the age of 59 years old. He worked on his home, land and gardens in South Carolina for the next 34 years.  He loved sharing his completed projects in South Carolina with his family.

Most of all he was a man who had a strong sense of faith in the word of the Lord.  His book, The Bible was always by his side from morning until night.

Funeral Services will be held at the Rabun Creek Baptist Church at 12 noon, Thursday, September 14, 2017.  Burial will follow immediately after in the Rabun Creek Cemetery.

Visitation will be held from 11 a.m. until the hour of services at the church on Thursday.