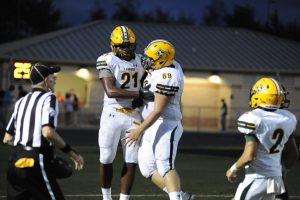 Last week was one to forget for all of the Laurens County varsity football teams as well as Presbyterian College. All four teams suffered lopsided defeats.

Now the four look to bounce back as two of the four hit the road this coming week against various out-of-region (or out-of-conference) competition.

Here are this week’s games:

Irmo got two touchdown from Kendrell Flowers, along with a defensive touchdown and a special team’s touchdown. Quarterback John Ragin was 14 of 25 for 168 yards and two touchdowns in the victory.

These two teams met at Laurens last season with the Raiders tossing a 21-0 shutout at K.C. Hanna Stadium.

Clinton (0-2) vs. Aiken (0-3), at Wilder Stadium: The Fighting Green Hornets were able to pick up their offensive production in Friday’s loss to the Academy of Richmond County, and gave up the fewest points of any game this season as well, but it wasn’t enough in a 33-25 loss on the road.

AJA won its second straight game by rolling past W.W. King, 46-8. The defending SCISA 8-Man state champions played the Crusaders in the first round of last season’s playoffs, winning 66-0.

Presbyterian (0-1) vs. The Citadel (1-0), noon, at Bailey Memorial Stadium: After a tough start to the season at FBS opponent Wake Forest, Presbyterian welcomes the Bulldogs to Clinton for a non-conference battle. The game was originally slated for Charleston, but Hurricane Irma’s impending track toward the South Carolina coastline forced the game site to be changed.

The Citadel enters off a 31-14 victory over Division-II Newberry. Running back Cam Jackson, picked to the preseason All-Southern Conference squad, rushed for 110 yards on nine carries with 74 of those yards coming on a third-quarter touchdown run. The Citadel rushed for 374 yards in the game on 63 attempts, throwing only 13 times against the Wolves.

The Citadel was picked to finish second in the preseason voting, behind only Wofford. The Bulldogs went 10-2 last season before being eliminated by Wofford in the FCS playoffs.