The much-anticipated District 55 school bond referendum is sending voters to the polls today, Tuesday, Sept. 5, and their votes will add to the 1,272 absentee votes already cast.
There were even more ballots requested, said Lynne West, director of Laurens County Registration & Elections, as 1,352 people had actually asked for the absentee ballots. Of the votes cast, 31 were sent in by mail and 1,241 ballots were cast by walk-in voters at the county’s Registration and Election office in the Historic Courthouse in downtown Laurens.
Voting is expected to be fairly heavy Tuesday among the 23,304 eligible voters from 27 different precincts included in Laurens County School District 55. Polls will be open from 7 a.m. to 7 p.m. for the referendum vote, and at many of the precincts some voters are eligible and others are not. Some precincts have very few voters who qualify, said West, such as Clinton Mill and Lydia Mill, but none of the precincts are being combined  and all 27 within District 55 will be open. GISmaps are available at http://www.laurenscountygis.org.
“In Clinton Mill there are only 10 voters who qualify, ” she said, while Lydia Mill precinct only has 37 voters residing in District 55.
Other outlying areas may also be confusing, such as Ware Shoals, where some voters reside in District 55 and others in District 51.
The district of residence can be found on the voter registration card, Laurens County GIS or by calling the office at 984-4431. The office will be open all day Tuesday for voters who want to check before they head to their precinct.
Otherwise, voters can find out when they arrive whether or not they are eligible. Whether they live in District 55, 56 or 51 all has to do with their address, West said, and only residents within District 55 will be allowed to cast a vote.
The District 55 referendum is for a $109 million bond that would provide not only a new high school with the upgraded technology needed for current required curriculum but also a consolidated and broad-based academy-style middle school, which would be at the current LDHS.
The $109 million bond covers the cost to build a gymnasium at Gray Court-Owings school and upgrades to Sanders, which would become the Prep Academy. Gray Court and Hickory Tavern middle schoolers would still have the choice to remain at Hickory Tavern, the only District 55 middle school with science labs.
Middle schoolers at the consolidated and upgraded LDHS facility will be able to choose from several middle school academies, such as arts, or STEM related coursework, in addition to their traditional curriculum. Children would be spending the school day within specific pods for their educational and specialized curriculums, so they would not need to traverse the campus as high schoolers do currently.
The current Laurens Middle would become an elementary school, relieving severe overflow at Laurens Elementary and Ford.
The information was provided Monday during a press conference when six of the seven District 55 trustees encouraged voters to consider the need for the new schools and provided additional details.
Speaking in the role as community citizens at the “Vote Yes” headquarters on Hillcrest Drive, Laurens, a document read by Terri Martin outlined more plans for the school, explaining that the board of trustees had been speaking with past superintendents about the need for a new high school for many years and hired superintendent Dr. Stephen Peters to put that plan into action.
Martin said the district was looking at three different tracts of land, one across highway 76 for the current school, one on Raider Road behind LDHS and another closer to the Bi-Lo shopping center, and each location was for the purpose of being in the center of the broad school district to avoid children from having to travel distances longer than they have in these last four and a half decades since LDHS was built.
Posted in News and tagged District 55, Laurens, Laurens County School District 55, new school, referendum, Vote 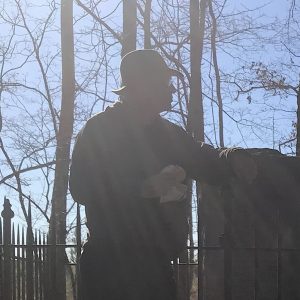 Cadaver dogs, historians search for the dead at Hayes’ Station in Laurens County