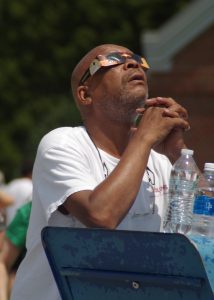 Laurens and Clinton teemed with people Monday in anticipation of a celestial event, the likes of which last occurred nearly a century ago in 1918.

As the skies went dark around 2:45 p.m. with the beginning of “the totality” and the moon’s shadow completely covered the sun, the hundreds witnessing the event at the Laurens County Library applauded.

By estimation, thousands had traveled many miles and waited hours for that singular moment.

“We were chasing clouds all morning,” said Dennis Gaudet, who arrived at the Laurens County Airport from Massachusetts before 10 a.m. Monday with friends Bill and Nancy Cormier and pilot Steve Grady. “We decided on Laurens early this morning.”

They found no clouds in the forecast for Laurens and touched down at the airport where they would be joined by more than 60 aircraft and their passengers.

Some 2,000 were estimated to have witnessed the eclipse on Main Street in Clinton, while another estimated 1,200-1,500 invaded the Laurens’ Historic Square. Hundreds of others took in the eclipse at the Laurens County Library and Little River Park and in the rural areas of Mountville, Cross Hill and Waterloo, which had the longest times of total darkness.

“I’ve been from the Chihuahua Desert to the backwoods of Maine, from the prairies of Colorado to the mangroves of south Florida,” Laurens County Library Assistant Joey Holmes posted on Facebook. “I have made my way through crowds in Manhattan and I have been alone on mountaintops. I have met hundreds of thousands of lives large and small, from Flying Fish to subterranean salamanders. I have had chats with some very powerful politicians and entertainment legends beloved by millions. Today, today in my hometown, today at my job, today I had an experience I will never forget!”

While the library and Clinton planned for the event, Zeke Benjamin, a neighbor and member of Mountville Baptist Church, said the church ended up hosting an impromptu viewing with visitors coming from as many as 20 locales (judging from the license plates), including Louisiana, Washington, D.C., Maryland and New York. A group from Wake Forest University was also in attendance.

Events leading up to the eclipse included Friday night’s Total Eclipse on the Rails in Clinton and the Dark Side of the Moon Cruise-In Sunday afternoon on the Historic Square in Laurens.

Allen “A.J.” Koszi and brother Ray Stoeck, of Pennsylvania, organized the eclipse-themed Cruise-In with sponsorship from the Laurens County Chamber of Commerce. More than 50 classic cars lined the square for the Cruise-In.

“We enjoyed working with the Pontiac Grand Prix Chapter, the Palmetto Chapter of the Pontiac Oakland Club International, and Main Street Laurens to host the Dark Side of the Moon Cruise-In as one of the many Eclipse events throughout our County over the weekend,” said Laurens County Chamber of Commerce President and Executive Director Amanda Munyan. “We handed out over 300 free glasses at the cruise in as we enjoyed the classic cars and festivities.”

Members of the car club were to witness the eclipse from Lake Rabon Monday, while downtown Laurens became a hub to view the eclipse and hosted more people than anyone had anticipated.

“I was amazed at the number of people downtown,” said Main Street Laurens Director Jonathan Irick. “Everyone kept commenting on how nice downtown was and how welcoming everyone in Laurens was.”