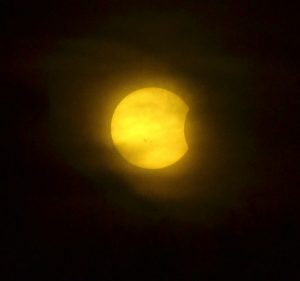 Get your approved eclipse glasses ready, because the eclipse has already begun in Oregon and the moon’s shadow will begin blocking the edge of the sun here about 1:10 p.m. today.

Though the timeline changes slightly across the county, the time for totality – the time during the eclipse when the sky is darkest – begins at 2:39:31, p.m. and the end of totality is 2:41:57. Because the path is directly through Laurens County, the 2 minutes and 26 seconds is among the longer totality periods in the upstate.

The entire eclipse will be completed by 4:04 p.m.

Use glasses the entire three hours, except they can come off during complete totality then put on again as soon as totality ends. Some sites recommend that pets be put up in case some curious animals might take too many glances at the sky.