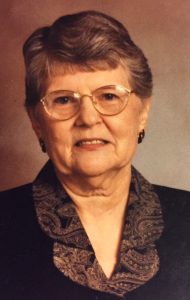 Donna enjoyed reading, playing Bridge, crocheting, knitting, and needlepoint. She maintained a witty sense of humor throughout her life, as well as a heart for helping others.

Donna will be buried at Middlebury Union Cemetery, alongside her parents, in Keeneyville, Penn. There will be a Celebration of Life at a later date.

The family wishes to thank all the staff at Bailey Manor in Clinton, S.C., and Bethany Manor, Horseheads, N.Y.. A special thanks to the many friends from the Horseheads United Methodist Church who never forgot her, no matter where she lived, and continued to support her with cards, letters and personal visits.