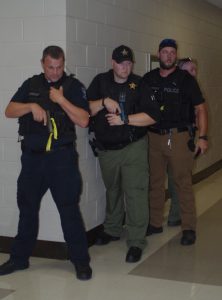 A soundtrack of screams and mayhem played over the public-address system Wednesday morning at Hickory Tavern School.

Chaos was the idea as local law enforcement and first responders conducted a live-shooter drill, roleplaying what might happen if a gunman entered the school.

“You get to see that things come from different angles and it all happens pretty quickly,” Laurens Police Lt. Heath Copeland said. “It’s controlled chaos, but there’s definitely chaos. Communication we found out is something we need to work on, but overall it was very good.”

Wednesday’s was the first such exercise at Hickory Tavern School, but officials say they would like to conduct one at every school in the county as they prepare for a day they hope will not come. Earlier this year, a similar training drill was held at Piedmont Technical College’s Laurens campus.

“It showed us our gaps as educators, and it showed the sheriff’s department their gaps as responders,” said Hickory Tavern Principal Tina Faulkner. “I think it went very well.”

Hickory Tavern School is unique in most areas because it houses kindergarten through eighth grade, meaning students’ ages can range from 4-15. Laurens County has two such schools with Hickory Tavern and Gray Court-Owings.

Hickory Tavern’s entire teaching staff participated in the event held one day before students reported for the beginning of the 2017-18 school year. Several students were also took part in the scenario, being evacuated from classrooms and filtered to a triage center operated by local EMS units in the school gym.

“We’ll do a much more in-depth briefing later, but I’m very proud of the job that was done,” Laurens County Sheriff Don Reynolds said. “These guys have worked really hard – people don’t know about the behind-the scenes work and logistics that goes into putting something like this together. I’m proud. I want to give these people peace of mind, the children and the teachers, and I think this helped start that process. We need to do this in all the schools.”

Reynolds said giving local law enforcement a drill in the schools themselves helps the officers much more than if they had to rely on diagrams and blueprints.

Faulkner said making sure her school is safe is her top priority as an administrator.

“It’s a new day. There were days when the schoolhouse was open to everybody,” she said. “We have to be cautious. Even as an educator who would like to put academics first, I have to put safety first. My first line of defense as an educator is to be safe – then I can educate them.”