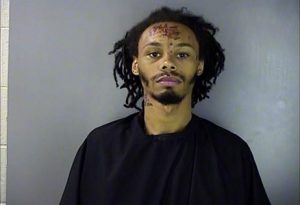 An anonymous tip to the Laurens County Sheriff’s Office just after 11 a.m. Wednesday led to the capture of a man who escaped from the Greenwood County Jail a few minutes later.

After receiving the tip that escapee Nathaniel Tyler Wideman, 22, was in Gray Court driving a blue Ford Taurus sedan, an LCSO deputy spotted the vehicle at 11:28 a.m. on Friendship Church road near S.C. Highway 14.

Wideman and a passenger in the car, Dexter Chambers of Gray Court, attempted to flee when the deputy initiated a traffic stop, turning onto the Frontage Road at Highway 14 and I-385 and overturning the vehicle.

Both Wideman and Chambers were treated for non-serious injuries at Greenville Memorial Hospital before being transported to jail. Wideman was returned to the Greenwood County Jail, and Chambers was booked into the Johnson Detention Center where he was charged with aiding and abetting and possession of crack cocaine.

“I’m extremely proud of the men and women of the Laurens County Sheriff’s Office,” Laurens County Sheriff Don Reynolds said. “Day in and day out, these deputies work hard to protect the citizens of this county. By having extra manpower patrolling the streets and roads of Laurens County, we were able to apprehend an escaped convict. Teamwork goes a long way.”