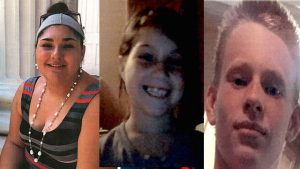 Three teenagers who ran away from the Thornwell Home for Children in Clinton Tuesday night were found safe late Wednesday afternoon.

The three were found near Trotter’s Restaurant on Highway 76 in Clinton, about 2.5 miles from Thornwell.

Local law enforcement from Clinton Public Safety, the Laurens County Sheriff’s Office and SLED spent most of the day Wednesday searching for the trio, which included sisters Destiny Porter, 15, and Kaylee Cruz, 13, along with Steven Smith, 15.

The search ended when Cruz and Smith went into Trotter’s and identified themselves, said Clinton Public Safety Director Robin Morse.

“They basically went into Trotter’s and said, ‘We’re the runaways; we’re tired and hungry, call the police,’” Morse said.

Porter had remained in nearby woods where the teens had been hiding, but was found soon thereafter with the help of a SLED search helicopter and bloodhounds.

“We had a lot of people helping – the Sheriff’s Office had people over here helping us with manpower, and we called SLED up here,” Morse said. “It was a good collaborative effort. We worked hard. The people at Thornwell worked hard. I’m proud of the way everybody worked and proud of how it turned out. I’m glad the kids are safe.”