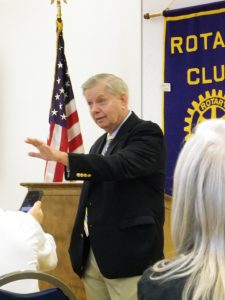 Graham spoke about an hour and took questions from a group of around 25 people at the Laurens City Hall, reiterating GOP talking points about the failures of the Affordable Care Act and federal tax reform.

Tension between North Korea and the U.S. has been on the rise since North Korea fired a pair of ballistic missiles which experts say could reach the continental U.S. North Korean leaders have also threatened an attack on U.S. territories in Guam.

“Everything we’ve done before hasn’t worked,” Graham said. “We have cajoled them, we’ve sent them wheat, we’ve sanctioned them and nothing is working. The bottom line is that Trump doesn’t have any place to kick the can. Everybody else talked tough and did nothing. Now we’ve run out of runway. They’ve got nuclear weapons. They are not going to stop until somebody stops them.”

I stand by him to deny them the capabilities to hit America,” he said. “I don’t want a war but if there’s going to be one, North Korea is going to lose it.”

Graham said the key to avoiding an armed and potentially devastating conflict in North Korea is the diplomatic support of China, which he said owns about 90 percent of the North Korean economy.

“You’ve got to convince China that we are serious about denying them the capability,” said Graham. “Tell China exactly what the red lines are and let them tell North Korea that if you go over this line you will pay a heavy price and mean it. I do believe that with credible military force on the table that North Korea will behave differently because they know they would lose a war with us but they don’t think we will do what we say.”

Graham also outlined what he hopes will be a bi-partisan plan to deliver the GOP’s campaign promises to repeal the Affordable Care Act.

He said he would not support a single-payer system modeled after those in Europe and Canada, but wanted to instead create state-run systems with financial support from the federal government in the form of block grants to each state.

“What I want to do is get more private-sector involvement, not less; more insurance companies, not less,” Graham said. “(We want) more people paying in who are healthy and taking care of the really sick and having larger at-risk pools.”

He also said the people running the healthcare system should be “closer to you,” the insured. His plan would also continue the “Obamacare” taxes on the wealthiest to help pay for his new system, instead of large tax breaks given the wealthy in both the failed plans from the U.S. Senate and House of Representatives.

“It’s now time for Americans who can afford to give a little more to give for the better good,” Graham said, including himself as one of those who should give “a little more.”

“Ronald Reagan worked with Tip O’Neal to save Social Security,” Graham said. “Somebody needs to do what Ronald Reagan did. I’m willing to be that Republican if I can find a Democrat.”