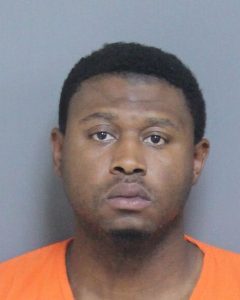 A Piedmont man is in the Johnson Detention Center after leading Laurens County Sheriff’s Office deputies on a chase that ended in Clinton Wednesday afternoon.

Abercrombie is charged with driving under suspension, failure to stop for a blue light, habitual traffic offender, operating an uninsured vehicle, speeding and reckless driving.

According to the LCSO, Abercrombie was clocked by a deputy on radar going 95 m.p.h. on I-385 Southbound near S.C. Highway 49 and failed to stop. A chase ensued and Abercrombie allegedly reached speeds in excess of 120 m.p.h.

After criss-crossing between Spartanburg and Laurens counties on Highway 49, the chase wound back to I-26 and then to S.C. Highway 56 and into Clinton. After driving in the wrong direction down Musgrove Street, Abercrombie reportedly jumped a curb, crossed a sidewalk and careened into the Norfolk Southern Railroad tracks.

According to the LCSO incident report, Abercrombie then left the vehicle on foot and was located a short time later after he broke into an apartment on Clay Street. Abercrombie was reportedly found hiding in a closet in the apartment and arrested without incident.

A female passenger in the vehicle was uninjured.