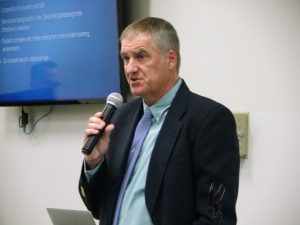 The “Vote Yes” event was organized in support of the $109 million bond referendum for a new Laurens District High School and other district-wide building projects brought forth by Laurens School District 55. The referendum will be put to a vote on Sept. 5.

“This is to answer questions in the community that have been lingering for several months,” District 55 Schools Board of Trustees Member Robby Bell said. “This is our roll out – our kick off.”

Jeff Ferris, president of sfl+a/First Floor, opened the event with a Powerpoint presentation that showed conceptual drawings of the potential new LDHS. Ferris’ firm was chosen among a handful of architectural groups to design the project.

Ferris said the new school is imagined as a place where students want to spend their time, outlining its modern learning facilities and single-point entry for safety.

“One of the key concepts for this building is the single-point entrance,” Ferris said. “You want to be able to control entry into the building – there’s a vestibule here where you can lock down the building. . . . There’s a large common area, a lot of natural light – it’s a place where students want to be.

Ferris said building design can be a tool to improve an educational experience for students, teachers and administrators.

“If we can help children see their God-given gifts and help them to grow and become everything they were meant to become, then that’s all we can do as parents . . . and as a community.”

District 55 Director of Operations Dr. Rhett Harris outlined the needs of the district and the reasons behind the referendum.

Harris noted that the average age of the school buildings currently utilized by the district is 56 years – a number that includes the 16-year-old Waterloo Elementary, the newest school in the District 55.

Among the list of reasons for building improvements and – in the case of LDHS – replacement, Harris included the competition for talented educators as well as the competition students face for scholarship dollars and jobs.

“We want to be able to give (our students) the same facilities, the same opportunities that some of these other students are getting,” he said. “We don’t want our students to be at a disadvantage.”

Gray Court resident Eric Neal heard the presentation, but said he felt like not enough questions were answered. Neal, who also voiced concerns about cost overruns, said he was frustrated that a site for the proposed new high school has not been decided upon.

“If I’m the taxpayer and they’re asking me to pay for it – and they are – shouldn’t I know what I’m buying?” Neal said. “They don’t want to tell me where the property is, but they want to ask me to write a check for it.”

Neal asked aloud where the new school would be located and was told several properties are being considered and all are one-five miles from the current LDHS campus.

Organizers asked for all questions to be submitted by notecard, and they would be answered on the organization’s website, Laurensfuture.education.

District 55 Board Member and Chair of the Kids First – Laurens Future organization Terri Martin said she felt that the kick-off event went well.

“I thought it went really good,” she said. “We never know what to expect. We’ve heard a lot of negative things about waiting too long to put stuff out, but there were a lot of legal things we had to do as a board and couldn’t put it out earlier. So, I think this was a good time.”