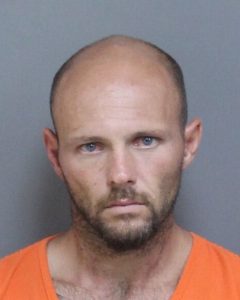 A man carrying more than 40 grams of crystal meth attempted to escape arrest by hiding in the Cross Hill Fire Department Monday afternoon.

According to the Laurens County Sheriff’s Office, LCSO Deputy Darrin Boyd chased down Bryan Lee Roeker and arrested him as Roeker attempted to flee the fire department on foot.

Roeker, of Clinton, is in the Johnson Detention Center charged with several offenses, including drug trafficking (cocaine or methamphetamine), third-degree burglary, distribution/manufacturing of a controlled substance, malicious injury to animal or personal property, driving under suspension and failure to stop for a blue light.

Boyd originally responded to a call from a Cross Hill resident concerning vandalism. The victim reported that she saw a white male standing outside her home when she went to feed her dog, but the man left on foot toward a wooded area after being spotted.

Boyd patrolled the area and spotted a man fitting the description given to him at the Cross Hill Community Park. Again, the man attempted to flee on foot, running into the Cross Hill Fire Department.

As Boyd waited for backup to arrive, the suspect, now identified as Roeker, ran out of the fire department with Boyd in pursuit. Boyd chased down the suspect and placed him under arrest.

Upon searching the suspect, the LCSO reported that Boyd discovered more than 40 grams of crystal meth in a plastic bag on the suspect’s person.