Miss Laurens County Teen Kathryn Tribble of Laurens, pictured, right,  was among the top 17 young women who made it into the first round in the finals of the Miss South Carolina Teen pageant last night, Friday, June 23, at Township Auditorium in 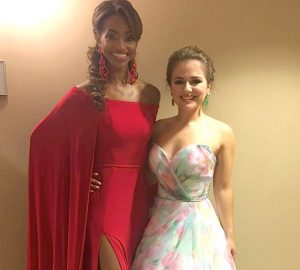 Tribble, a student at Laurens District High School, was selected to advance into the physical fitness competition before the group was narrowed again later in the evening, and eventually the title of Miss South Carolina Teen was captured by Ally McCaslin, who had arrived as Miss Woodmont High Teen.

Tribble and Miss Laurens County Kyndall Ellis, pictured left, have been through various activities and preliminary competition this week in preparation for this weekend’s pageants.

Township Auditorium is the home of the Miss South Carolina Scholarship Pageant, and it can be seen live on several Columbia area television stations and it can be live streamed at www.miss-sc.org.

*An earlier version said Tribble was a Clinton resident and CHS student. The Advertiser regrets the error.