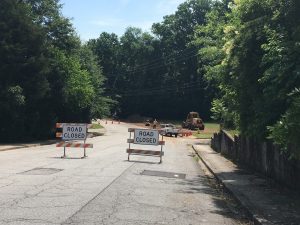 Gordon Street remains closed to traffic between the Laurens Post Office and the Little River Amphitheater as the South Carolina Department of Transportation works to repair a storm drain pipe. DOT crews responded to a report of a sinkhole in that area and, upon further investigation, found that the reinforced concrete pipe had separated at several joints. After digging out sections of the old pipe, they installed new corrugated high-density polyethylene pipe to carry the storm water. Crews hope to reopen the road by Thursday morning.