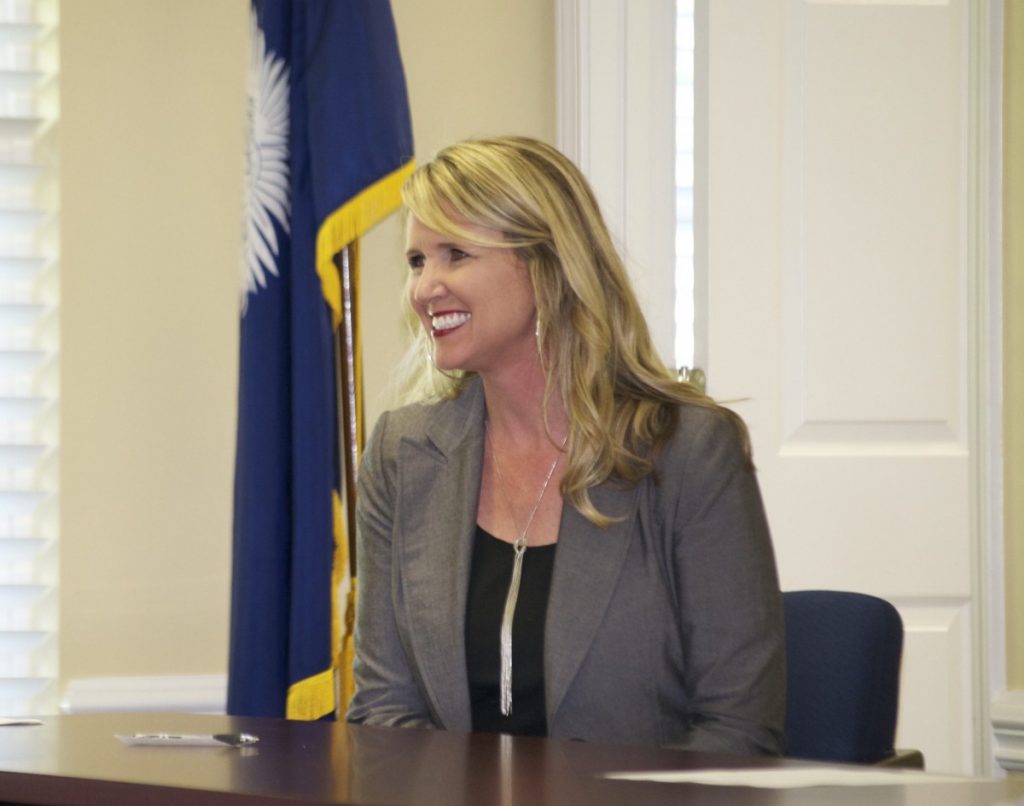 Amanda Munyan is heading back to the Laurens County Chamber of Commerce in a few weeks, but when she returns July 10, she’ll be in a new role as CEO and president, and the first woman to hold that position in the chamber’s history.

“We have a new CEO, Amanda,” said board chair Marilyn Easter, motioning toward Munyan, who had been ushered into the room prior to the vote and following an executive session where the board had deliberated about half an hour in a called meeting Friday morning.

Former president and CEO Greg Alexander resigned in late March to accept a position with the Hilton Head/Beaufort area chamber, and since that time, applications have been reviewed and narrowed by the executive committee, made up of Easter and other recent board chairs, along with chair-elect Brenda Ligon.

“I’m delighted,” said former chair King Dixon, who verified that Munyan is the first woman in that role. “The Chamber made wonderful strides during Greg’s tenure but I think with Amanda, and with Brenda coming in, the chamber will be entering a new era.”

Easter will turn the chairman role over to Ligon in July, and Ligon, owner of Precept Staffing, will be the first African American to hold the board chair position.

Easter applauded the decision to hire Munyan because she brings so much knowledge of the business community in Laurens County.

“I’m really excited for her to come,” Easter said. “She is someone who has had positive connections here for so long and has such energy and passion for Laurens County.”

“We welcome her and we appreciate your time here this morning on this very important decision,” Easter continued. “We are confident in Amanda’s leadership as president and CEO to continue the Chamber’s mission here to serve as a unified voice to promote, strengthen and develop the business and community of Laurens County.”

Easter said Munyan’s wisdom, experience and energy would continue the chamber’s efforts in promoting and strengthening the businesses of Laurens County, and thus increasing the quality of life here.

Munyan has had plenty of experience in small business development. She was named the Main Street Laurens Merchant of the Year during the years she owned a small business, Pixie Dust, which she eventually closed in order to spend more time with her children when they were young. She then helped strengthen small businesses through her work as a coordinator of the chamber’s membership events before taking on the full time position in communications and maketing.

Following the unanimous vote, Munyan said even though she’s remained connected with the chamber as the United Way representative to the board and on the workforce development committee, she wants to first sit down with each of the committee chairs to get a better grasp of  the many programs currently underway at the chamber.

“That’s the first thing I’m going to do, and I’m also coming in right as we are gearing up for the annual golf tournament and the oyster roast,” she said, referring to the two primary fundraisers for the non-profit organization. “There’s never really a slow time at the chamber and the staff have done a tremendous job carrying the work since Greg left, with Team Ecology, the Red Carpet Breakfast and this weekend’s Heritage Hype.”

Munyan said she began compiling new ideas for the chamber as soon as she decided to apply, “just in case I got the job,” she said following the vote. “I’ve been brainstorming and have a notebook going, and I can’t wait to get started.”